The Roller Blade Seven: The Story of the Production 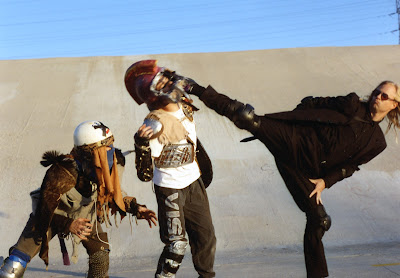 This article can also be found on scottshaw.com @ The Roller Blade Seven: The Story of the Production.

Copyright © 2018 — All Rights Reserved
No part of this may be used without the expressed permission of Scott Shaw or his representatives.
at March 09, 2018

Here is an interestingly thoughtful article written about Zen Filmmaking, the Roller Blade Seven, Scott Shaw, and Donald G. Jackson. This a...

Scott Shaw
Hi Everyone, I’m an Author, Filmmaker, Actor, Composer, Photographer, Artist, Blogger, etc... As an author, I've written a bunch of books that are available everywhere. Plus, they have been translated into a lot of different languages. So, you can find them around the world. As a filmmaker, back in 1991, I created a new style of filmmaking that I titled, Zen Filmmaking. In essence, the primary premise behind Zen Filmmaking is that you don't use a screenplay in the creation of a film. Instead, you allow the spontaneous creative energy of the moment to be your only guide in the filmmaking process. I've made a bunch of movies based on this style of filmmaking. In a nutshell that’s me… Hit over to scottshaw.com for the all and the everything Scott Shaw. Be Positive!